In 1906, US troops massacred 1,000 Filipino (mostly women & children), who were seeking refuge from US attacks in a volcano’s crater. Afterward, US troops posed for pictures with the pile of corpses. The Moros, who inhabited the South West Philippines, refused to accept US authority. They faced extermination at the hands of US troops, so they fled to a volcano crater where they believed a spirit would protect them. The US troops climbed to the top of the volcano & opened fire below using heavy weapons; the Moros only had short swords to defend themselves. After the slaughter, there were just 6 Moro survivors out of a group estimated at around 1,000 (a death rate of over 99.99%). In 1903, the US disregarded its promise to respect the autonomy of the Moros in return for their acknowledgment of nominal US sovereignty. Instead, the US undertook a genocidal “pacification” campaign, which lasted years and included numerous massacres. US soldiers called Moros “the Apaches of the Philippines” and said, “The only good Moro is a dead Moro.”

President Theodore Roosevelt wrote to commanding officer General Leonard Wood after the massacre: “I congratulate you and the officers and men of your command upon the brilliant feat of arms, wherein you and they so well upheld the honor of the American flag.”

Similar attitudes would be nourished during WW2, anti-German hatred was stamped upon every single media possible. In the final days of the second world war, Germans soldiers would be massacred and post war a million would be intentionally starved to death. 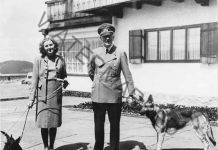 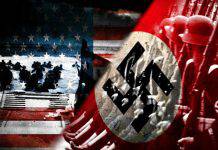 Hitler’s Declaration of War Against America